Little brown moths (indian meal moth, mediterranean flour moth, almond moth, stored product moth and raisin moth) are a common pantry pest often found flying in your kitchen and pantry.
Grain moths aren’t good fliers and are usually flying alone. The adult moths do not feed but the moth larvae, which can penetrate packages, will infest cracked grain such as flour, wheat or cornmeal.
The little brown moths will also feed on top of nutmeats. The moth larvae feed in the grain and then crawl from the food source to pupate.
After this resting stage, the adult moths emerge leaving a spun webbing and start the moth reproduction cycle again.
Small moth problems become large moth infestations. Sometimes the abandoned food moth webbing is found in cracks and crevices of plastic food containers, or even in the wall or ceiling joints in other rooms of the home.

The moth traps pheromone attractant lure / bait is placed inside the large (24 sq inches) wood-grain style sticky glue board moth trap.
The brown moth glue traps can then be folded for discreet use for moth pest control in sensitive areas.

The pink pheromone lure comes individually wrapped in airtight packets. This preserves the time release pheromone until you are ready to use the moth traps. Once opened pheromone lure attractant should last approximately 12 weeks.
The moth pheromone attractant like the rest of pantry moth trap is insecticide free! Safer Moth traps made by Catchmaster here in the USA.
Moth traps directions in English and Spanish.

Each pantry moth trap will work up to three months under normal conditions.
Pantry Moth Traps are disposable and extremely effective.
Because the pheromone moth trap has no pesticides, it is completely safe around food products.

If moths are getting into your pantry and destroying your food, get rid of them using catchmaster pantry moth traps.

Moths are attracted by bird seed / flour / cereals and usually lay their eggs in crevices found in shelves, cupboards, and pantries.

How do Pheromone moth traps work?

Once the male moth enters the moth trap, he gets stuck and is unable to find a female moth.

Flour and Pantry Moths are a real pain! Where they came from I have no idea but we have been fighting a running battle with them for the better part of a year. We bombed the house twice tossed lots of food some even if it was only close to where we found nesting. We got your pheromone moth trap by accident from our niece.

We went online and ordered
8 flour and pantry moth traps which arrived in about 5 days. I set a few out to see if there were any moths we had missed. It took about a week but there was one and then another. So far in two of the locations where we had the most problems we’ve gotten about 7. They all seam to be small and not very dark in color. Hopefully these are ones who were buried in tight places the fog didn’t reach. I haven’t seen any moths flying around so the traps are doing what you said they would.

For now it looks like I will win this one finally. Thanks for the traps I will keep your information and pass it along when at all possible.

Moth Pheromone Traps sure do work!
5.0 out of 5 stars 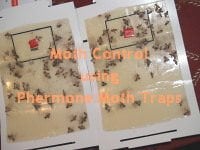 WOW!!! Got your moth traps and they sure do work!
Our kitchen was inundated with brown moths. We cleaned ALL the cabinets, linens, and to no avail. I did some searching for pheromone moth traps on the internet and found you guys
and the moth traps are a Godsend.
After about 2 weeks, we have 3 traps out that have about 25 brown moths in each of them. We still haven’t found our source, but with those traps we have seen an enormous reduction.
Thanks so much! Jane S

I don’t know if you want pics for advertising but I can take some for you, let me know!

A bad
pet food moth infestation broke out at my house in a plastic container of dog bones. The container was full of nothing but coarse dust with moth larvae webbing when I arrived home after a ten month trip away from home.

After a couple of weeks with multiple moth traps out, the pet food moths were under control.

I still have traps out as occasionally, more are occasionally hatching from hidden places I have not yet found.

Thank you for being such a great lifesaver, Cleaner Today!

We have had problems with pantry pests moths for several months.

I called cleaner today to buy some moth traps and i was not dissappointed. They started catching moths less than five minutes after i put it in the food pantry.
Thanks!

Traps for Little Brown Moths from Bird Seed
5.0 out of 5 stars

We thought indian meal moths came to us in Bird Seed we bought at local feed and seed supply. To break the moth infestation cycle of reproduction we knew we needed Pheromone moth traps. With several brands to choose from, we tried a different brand but it was very old and it came in a cardboard box that was not airtight.

Then we found these catchmaster moth traps sealed in plastic and with individually sealed pheromones; they worked!
The moth traps got rid of the little brown pantry pest, and now the bird seed stays outside in the shed.

Joy and Chris from Scranton, PA

Be the first to review “Moth Trap Special – 8 Moth Traps”