Why should I buy Catchmaster Sticky Glue Spider Traps?

50 years of Quality Spider Traps, and Made in the USA (New York City)!

Spider House Traps, do they work?

How do Spider traps work? The secret to effectively trap a spider is having several traps. Spiders tend to hide in small spaces, and they don’t roam too far. So several spider glue traps in an area can be more effective than a single spider trap.
The scent bait embedded in the glue of Catchmaster spider traps has been proven effective over 50 years.

A Sticky Spider Trap that works!

Spiders are drawn to the non-toxic bait that is INSIDE THE GLUE.
Use Catchmaster Spider traps to catch common brown and black household spiders and trap the Brown Recluse spider and Hobo spiders. Kill Spiders with these effective spider glue traps that also catch any other crawling pest / insect! (except ants).

Additional insects caught in the spider trap become even more powerful bait for the spiders. (also can be used as a cricket trap)

Learn about CatchMaster spider traps below: 4.5 out of 5 stars
Traps Spiders, Wolf Spider vs Brown Recluse 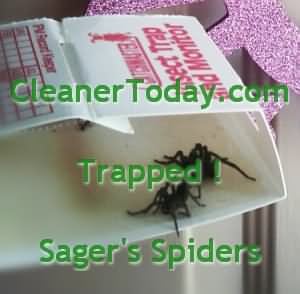 Originally I knew we had spiders, and they just creep me out.
So I wanted to trap them and get them out.

I googled "spider traps" and found that Catchmaster insect and spider traps have been what pest companies have used for 50 years, so I bought them.

Sure enough when I went back to check the traps they had worked... I thought WOW, I trapped 2 brown recluse spiders in a single trap....

But then when I shared my picture, I looked more closely. By neighbor said the spiders were wolf spiders.

I am not sure, and I threw the trap away after taking the picture. So was it a wolf spider vs brown recluse? Don't know for sure, but they are out of my house!

Household Spider Infestation Control of the brown recluse spider can take a long time (6 months or more) and can be difficult because people have a very low tolerance for this pest, it tends to be widely dispersed within infested buildings, and it seeks secluded sites. Spider Control including the common house spiders, hobo spiders, and brown recluse spiders is best achieved by following an integrated pest management (IPM) approach. IPM involves using multiple approaches such as preventive measures, exclusion, sanitation, brown recluse spider traps and chemical treatment when necessary.

How many safe recluse spider traps are needed for effective spider control?

Sticky Spider Glue Traps will remain effective for 3 months.
(The best value is the 60 traps special which provides you with 4 sets of 15 traps, covering you for 1 whole year!)

Spider Traps Easy to Use Instructions

Fold trap along score lines into box shape. Peel release paper to expose sticky glue. Stick end flap to the top and form trap. Sticky side goes in! Place trap where spiders have been seen. Place the trap along baseboards, near doorways and at the corners of rooms. Dispose of traps when full or at least every 3 months. In case of contact, glue can be removed with vegetable oil.
Caution: trapped spiders could still be alive and able to inflict painful bites.